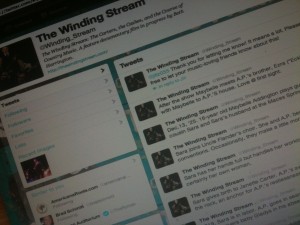 We here at The Winding Stream acknowledge that we learn a lot from the Original Carters. Don’t get boxed in. Broaden your horizons. Seek out the new, while honoring the old. This is evident in the way A.P. found new material for the trio to perform in the unlikeliest places, the way Sara chose to approach her vocals with a new kind of directness and power, and the way Maybelle was always stretching herself as a guitarist, absorbing and inventing as she went.

We want to be like them. So, while we are keen to tell the Carter Family story in the medium we know best – film* – we are also crossing platforms, as they say. We’re in the midst of writing an ebook to accompany the film – a Carter Family oral history based on the interviews we’ve done.  And we’re still planning on developing a tourism app that will show you around Maces Springs and Bristol so you can walk where the Carters did and see what they saw.

Most recently, we’re trying a little experiment for those social media mavens who favor Twitter. It’s the Carter and Cash saga in tweets.  One a day. 140 characters or less. It’s kind of zen. How much can you say in that amount of space and make it count, especially with a story as rich as the Carters’?

Judge for yourself. We’re only a couple of weeks into it (you can go back and see what you missed). Chime in, if you have thoughts.  Add your details to the story. Correct us if we’ve got it wrong.  But revel in their tale. It’s an amazing one.

Let us know what you think.

* And never fear, we are making progress on post-production so there will be a film, too!