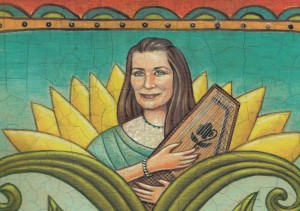 June Carter Cash died on May 15, 2003.  That makes it just a little over eight years now since this bright light left our world.  One of my big regrets is that, though we had made contact with June about doing an interview, circumstances kept us from meeting.  She passed away before we could meet.

I know everyone who did know her talks about how funny, warm and radiant she was.  One need only pay a visit to YouTube to get a sense of this.  Go now and check out a clip or two.   It’ll gladden your heart.

Here are a few lines about June.  The first three are from interviews we did for The Winding Stream. The last lines are written by June’s son, John Carter Cash in his book Anchored in Love.  Read it.

FERN SALYER, cousin: She and I did everything together. We used to wrestle and climb trees and go up in the mountain and stay all day. We were both tomboys. And we’d look in the trees and find some crow’s nest.  We’d climb up there and try to get to that crow’s nest. I know one time we got way up there in this tree and that crow was in the nest and it came after us and we almost fell out of the tree. But we were always doin’ things like that.

JOHNNY CASH, husband: I fell in love with that June, that red-headed one, that dancer, the one that told the jokes, the funny one.  She stole my heart right away, right away. And I kept telling her beginning in 1962 that “We’re gonna get married, we’ve got to, you’re meant to be mine. I know you are. “ I just knew it. We got married March 1, 1968 and we were together until she died. And we were two peas in a pod. We were never apart. June and I were never apart.

ROSANNE CASH, step-daughter:  My mother gave me roots, but June gave me wings.

JOHN CARTER CASH, son: Mom’s spirit still sparkles within all her grandchildren and great-grandchildren, whether related through blood or heart. It’s also evident in the hearts of her fans, old and new, the world over. In so many ways, the Wildwood Flower lives on.