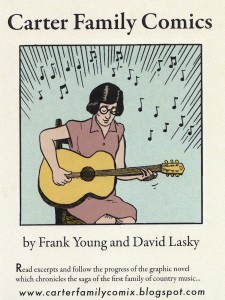 Recently I connected with a great guy named David Lasky. David is a Seattle-based illustrator who works in the medium some folks call graphic novels, but others might know as comic books.  Makes no nevermind.  The work he does is lovingly executed, evocative and charming.  Now I would think this no matter what; I’ve surfed around the web looking at David’s blog and his live journal and I’ve been totally delighted with what I’ve seen of his art.  But there’s one project he and his writer-collaborator Frank Young are currently engaged in that completely grabbed me. For obvious reasons. 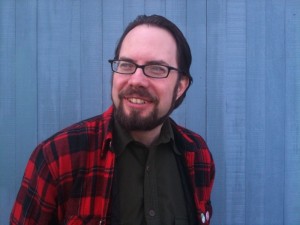 Naturally, I wanted to talk to David and lucky for me, he came to Portland last weekend to attend the Stumptown Comics Fest.  So, last Sunday over Lebanese food we spent two and a half hours talking about our shared passion for the Carters. What follows is a little interview.

Tell us a little about your colleague Frank? How does the collaboration work between writer and illustrator in the world of graphic novels?

Frank is an old friend of mine who knows a lot about American music, is a bit of a singer and musician himself, and is also an expert on old comic books and strips.  He seemed the perfect person to collaborate with on a project like this.

He and I conceptualized and plotted the book together.  We knew from the start that we wanted the art to evoke old comic strips, to more effectively bring the reader back into that pre-war era. Frank is writing the script, and is coloring my finished artwork, but he’s also contributed to the art by drawing thumbnails and roughs. I am the main artist on the book, but I’m also contributing input to the dialogue and colors.  So while we have our assigned jobs, we are also helping each other whenever possible.

Why the Carters? What appeals to you about their story that made you want to pursue this project?

For me, it was the sound of their music that got me.  The sound of Sara’s voice primarily.  Back in the 90’s, I heard a Carter Family song and thought: “Wow, that really sounds like country to me.”  And by that I don’t just mean country music, but THE country — country as opposed to the city or the suburbs.  I began to listen to the Rounder CDs, and wanted to know more about who these people were.  Around 2002, I asked Frank if he knew anything about the Carter Family.  It turned out that he did and our project began from there.

What new elements do you bring to telling their story when you use the medium of a comic book?

Please use the term “graphic novel” (ha).  Combining words and pictures, we want to put the reader right there into the Carters’ story, as if one was a fly on the wall.  For example, do you wonder what the scene might have looked and felt like at the Bristol Sessions?  Well, so do we, and we’re excited to have a chance to present it as part of our visual narrative.

As mentioned, we hope to evoke the look of 1930’s Sunday funnies.  I think that will help to enhance the illusion of actually being there with the Carters as their story unfolds.

What challenges have you had with this project?

Because much of the Carters’ story was and is oral history, there is often more than one version of events to choose from.  We’ve had to make educated guesses in a few places.  We’ve also had some wonderful help from Carter family descendants and other knowledgeable persons.

Another challenge was an attempt to request permission to use Carter Family lyrics.  After working with the rights holders for several months with no success, we decided to simply write a biography of the Carter Family that didn’t rely on reproducing their lyrics.  And if you think about it, you can’t really hear the songs in a graphic novel anyway.

What do you hope people will take away about the Carters once they read it?

The Carter Family not only made some of the most heartfelt music on record, but also has a fascinating personal history that encompasses much of what would happen later in American popular music.