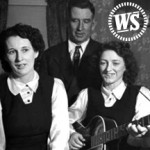 Lots of you are well aware that we began shooting The Winding Stream in 2003. Nine years ago this summer.

Last night I saw a friend who told me he was absolutely amazed that we’d stuck with this that long. It wasn’t meant as criticism. But still, he was baffled.

I joked that I was just plumb crazy. But then I told him this.

In the last 9 years I have amassed a treasure trove of what I consider to be important interviews with people who were witnesses to some of our most important shared cultural history. The early days of radio, the infancy of the record industry, the growth of interest in what would later be called “country” and “folk” music. People like Johnny Cash, Janette and Joe Carter, Mike Seeger, Charles Wolfe and others knew the Original Carter Family and were among the last living witnesses to the Carters’ role in all this. The people I just named have all passed away in the time we’ve been working on this film. I started to view completion of this film as a sacred trust. These folks had taken the time to share this with me.

This material couldn’t just languish on a shelf. It had to be made into the film I’d promised.

So we stuck with it. Through years when everyone turned us down. Through times when we scraped by with tiny amounts of money that would get us one more interview. Through lots and lots of days of colleagues and friends — er, actually, that’s redundant; my colleagues on The Winding Stream are my steadfast friends –donating their time and talent and energy to this. Through many sleepless nights when I did think that I was – indeed – plumb crazy to persist.

But now folks like you have stepped in. And we are getting much closer to our goal. Almost three-quarters of the way there with a week to go.

I feel like we will make it to the goal.

The campaign ends at 1:14 PM on June 28. Please help spread the word. Or give again if you can.

These are the days when Kickstarter campaigns can ramp up to success. IF people help get the word out.

It’s within reach if you reach out!

Beth and The Winding Stream Team