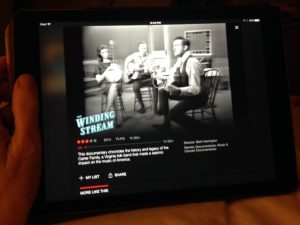 The Winding Stream DVD, soundtrack CD and book are now available here at our webstore

You can also find these products on Amazon, iTunes and many other digital platforms.
The film has been getting great reviews from both critics and folks like you!

Here’s what critics have been saying:

NYT Critics’ Pick: “ Thoughtfully assembled to showcase the music and the temperaments behind it, this jam-packed oral history of the Carter and Cash families weaves the voices of prominent musicians … with those of family members past and present. Leading us from Poor Valley, Va. …through decades of personal and professional landmarks, Ms. Harrington sweeps divorce, disappointment and the Great Depression into a single, upbeat package.

“…a gift to anyone interested in our musical roots…”

“Wonderful interviews, transcendent music, a heartfelt emotional story, The Winding Stream is among the greatest of all music documentaries, an instant American classic.”

And here’s what you’ve been saying:

A+ documentary on the Carter Family. The DNA of country music in America. Loved it.

Just watched the doc…I was so moved, I called my cousin who I have not spoken to in years to say we had to get our family together as we all play and sing as well…You have inspired me again to sing and play and I am so happy I found this. THANK YOU!

The Winding Stream brought me to tears more than once! Such an amazing documentary. I’ve always thought Mother Maybelle’s genius is underappreciated and this film made me very happy.

This is ridiculous…I can’t stop watching it. What’s wrong with me?