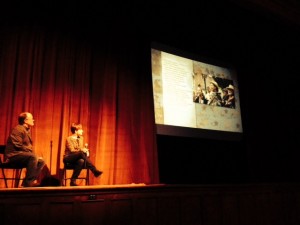 Louisville as a city is both a grande dame (think stately Victorian structures; the graceful Ohio River; the expansive bonnets of Kentucky Derby day) and a rambunctious brother (think a skilled, proud and purposely boastful Muhammed Ali; the revered manufacturer of baseball’s favorite tool, the Louisville Slugger bat; and that smooth yet hard hitting beverage, Kentucky bourbon).

So here we arrived on our third stop on the Southern Circuit, a lovely former Catholic school now a performing arts center, The Clifton Center. Music acts are most often on the bill – artists like Jay Farrar, The Carolina Chocolate Drops, Bill Frisell have played here. The center’s director, John Harris, led a great Q & A and shared with us that he, too, was a musician – a classically trained one.

In fact, he told us he’d played for the Vancouver (Washington) Symphony not long ago (where I make my home now). A small world moment.

I was excited to learn of an upcoming Lomax celebration this Fall (honoring the work of another famous song-collecting family). Hope I can return for it. But meanwhile, just glad to be associated with such a fine institution.