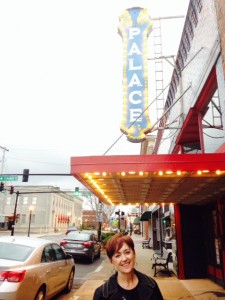 The Palace Theatre in Greater Gallatin. A movie house rescued by the community and lovingly brought back to life. The fourth stop on my Southern Circuit tour.

Tonight’s screening was prefaced by an email from Director of the Nashville Film Festival (where the film will screen next week after the Circuit is done). Women in Film Nashville is honoring The Winding Stream with the Best Film by a Female Director Award on April 18 on the second day of the Festival.

So not only was I greeted by friendly members of the Gallatin community tonight, but the president and VP of Women in Film Nashville stopped in to underscore the news.

I am relishing every moment of this ride. Really.