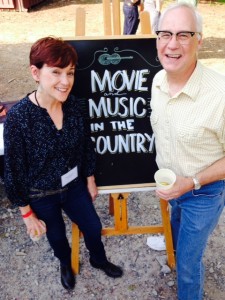 Sometimes technology gets the better of me. This last week or so that’s been the case. I’ve wanted to catch everyone up on the fabulous Southern Circuit Tour of Independent Film and doings just recently in Nashville, but my laptop was having none of it.

So we had to part ways.

My new laptop seems more willing to do my bidding.

In any case, I’m happy to report that the second half of the Southern Circuit was as rich and varied and welcoming as the first half. We played Wallace State College in Hanceville, Alabama to two receptive audiences who knew their Carter Family lore, then circled back to Georgia where we screened the film at an event hosted by the incredible Serenbe Film Institute. BBQ, bourbon, ballads of the Carters and a backwoods setting really made the evening special. Our last stop was Winder, Georgia where the Weber Family led the audience in a rousing version of “Will the Circle Be Unbroken” and we broke attendance records!

It was a great tour. Thanks to all the venues along the way and especially to Teresa Hollingsworth and everyone who makes the Southern Circuit possible!(I’m looking at you NEA!) This filmmaker is very grateful for the opportunity to show this film in this way. A brilliant idea that I would love to see replicated in other regions!