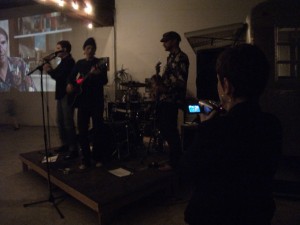 Friday night was the big Kickstarter party at Art Department and it was everything we could have wanted.  We had a tremendous turnout at a hip venue, live music by an authentic roots band (contrary to their name, Counterfeit Cash), good food and tasty local drink (thank you, Kurt and Rob Widmer!) and the support of family and friends (including friends we hadn’t met until Friday night). We raised money, to be sure, but as important was the enthusiasm generated by the event and by the Kickstarter campaign itself.

I slept heavily that night (exhausted) and woke up really happy. When I thought about why, I immediately acknowledged my good fortune at having such great people in my life. But there was an additional element to my euphoria.  It took me a while but I finally identified it.

Momentum.  The film seems to be taking on a life of its own. For a long time this project felt Sisyphean. Push the rock up the hill. The rock rolls back over us. Push it again. Repeat.

But now it seems lots of things we’ve been trying to put in place are starting to gel.  And we’re getting lots of good feedback about the rough cut and several leads for funding and maybe even corporate sponsorship [NOTE: If you have thoughts or leads on these areas, we’re all ears!]

I’ve learned a good lesson this year which is: “It’s good to ask.”  Lots of people have been aware of the film-in-progress but since I rarely said directly, “I need your help” it was not always offered.  I just assumed people knew I needed it.  Earlier this year, I finally asked a group of successful business and arts people to be my brainstormers on this project. I said “I need your help” aloud.  And they responded — magnificently.

The Kickstarter campaign is nearing its end, but it’s still bringing in much needed funding. We’ve met the stated goal which we will apply to finishing our filming but we could always use more. We have more than a week left in the campaign and now hope we can raise enough to continue editing. So I will ask point blank, “We need your help.”  Please pledge.  You can connect to the Kickstarter site right here from this blog.

I can’t emphasize enough that lots of people have been generous with their time and talent on this project and I am thankful for all their help.  But I’d like to close out this entry by drawing your attention to the photo below. It’s me with the film’s editor, Greg Snider.  Greg’s been so devoted to this film. His work has really been a tremendous gift. I’d like to just say a special thanks to him.  He’s a gem.