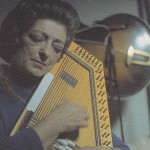 The following is a lovely testimonial about the importance of Mother Maybelle Carter and the aspirations of The Winding Stream project by our patroness and friend, the amazing Vikki Mee. Many thanks to her for her encouragement and vision.

I have been a supporter and fan of this project, The Winding Stream going on 7 years now and it’s been a delightful, inspiring journey. One of my favorite novels of all time is ” The Grapes of Wrath” by John Steinbeck as well as the 1939 film directed by John Ford. Mother Maybelle and her ongoing and unwavering commitment to the Carter Family musical legacy has always reminded me of the great matriarch, Ma Joad, from Steinbeck’s, “The Grapes of Wrath”.

At a time when female leadership was reluctantly acknowledged both of these women (one real and one fictional) forged ahead, driven by the belief in their families right to survive and pass on their own unique legacy. Although unsuccessful, Ma Joad did her best. In real life, Mother Maybelle did her best and succeeded….probably beyond her wildest dreams. The Carter Family’s historically significant musical legacy endures from the pages of “The Grapes of Wrath” and the Great Depression in to the 21st Century and IPod playlists.

I, for one, am truly and deeply in awe of this accomplishment…Mother Maybelle Rocks!

Fifty percent of the music played in the migrant camps during the Great Depression was made popular by the Carter Family. Woody Guthrie was greatly influenced by their music, adapting one of their ballads, “The World Is Not My Home” into his”I Ain’t Got No Home in This World”. Guthrie also later composed a song titled “The Ballad of Tom Joad” about the son of Ma Joad and the protagonist of this Pulitzer novel.  I like to think of Ma Joad singing along with Maybelle Carter, tapping her foot and taking a spin with Tom at the local barn dance.  The undeniable musical legacy of The Carter Family spans generations of musicians, almost 100 years of our 20th century history. From Woody to June Carter Cash, Johnny Cash, Rosanne Cash and on, to the likes of Kris Kristofferson, John Lennon, Jack White and The Carolina Chocolate Drops, the music of the Carter Family endures.

I challenge everyone to play a game called “Six Degrees of Mother Maybelle”. Bet we could give that Kevin Bacon dude a run for his money.

All roads lead to Maybelle, “her agile licks” and “infectious rhythms” and for me, her inspiring leadership and unwavering commitment to her family’s musical legacy.

The temptation is to state, “This will be a good film”. The truth is it is already a GREAT film. This is a clear testament to Beth Harrington’s tenacity, commitment and professional skills. It’s a honor to be part of The Winding Stream family and I ask every single one of the films’ 2,686 Facebook fans to join me and the other 334 Kickstarter donors in supporting Beth Harrington. Together we can move this GREAT film through post-production and to distribution.

Please join me in donating to this Kickstarter campaign. For example, if every Winding Stream Facebook fan out there pledged $10 (a couple of lattes), the goal would be met and then some. We need the help of each and every one of you! Please send in your donation and log on to the comment section to tell us why you support The Winding Stream. I figure it’s the least we can do to thank Maybelle for…..everything.

Look for my $10 donation under the name of Ma Joad…..Thanks!

The Faerie Godmother Fund of The Oregon Community Foundation