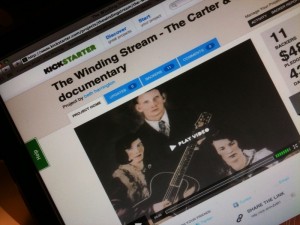 For those who’ve been following our saga closely, the film is in a very interesting place.

On the one hand, The Winding Stream is about 75% shot and a decent rough cut of it patiently resides on a drive at our editor’s house.

On the other hand, the rest of the shooting, the looming music and archival rights issues, and the long overdue payment of deferrals to talented people who have given of their time to get us this far (see editor above) all suggest that we have a ways to go still before you will be watching this on Netflix or your local PBS station or at a film festival like South by Southwest.

Proposals for a contract are being considered by public television programmers as we speak. Sometime in 2011 they’ll let us know.

Come the spring, the National Endowment for the Arts will be looking at a grant we submitted this past August for post-production funds.

But yesterday we decided to try something new — we launched a Kickstarter campaign, one of the latest wave of “crowdfunding” mechanisms you may have heard about.

Kickstarter was designed for artists of all stripes to raise funds for their projects.  An artist  – or in my case, a filmmaker – sets a financial goal and a timeline for the campaign (usually a month or two), posts a narrative about how the funds will be used and often shows a video clip on the site. There are also a list of  “rewards” corresponding to pledge amounts (like a PBS pledge drive “premium”).  Success depends on individuals making donations within the proposed time frame.

All good.  But therein lies the twist. The artist only gets the funds if the full amount is raised in the proposed time frame.

So, if the campaign says: “We need to raise $10,000 in 45 days” that means just that.  If the campaign falls short, the pledges are not collected and the artist gets nothing.

Think of it as a reality TV show about artists. With yours truly as one of the contestants. (Will I get to stay in the race or be voted off  the island? Will this be America’s Next Top Indie Film?  Will I get to Clog with the Stars? Or be the new Americana Idol?)

It’s my sincere hope that we can hit the ground running in 2011 and shoot the last of our Winding Stream interviews in the first few months of the new year.  Then we’d be able to move ahead with the editing of the film.  It would be a major step toward completion.

Now many people fret that they can’t make big contributions to such an effort.  But the thing about Kickstarter is that the vast majority of their successful campaigns come about because of lots of $10 and $25 donations. It’s very grassroots.  So if you can spare $10, it’s an enormous help! If you can afford more, we’d also be grateful.

You should also know that unlike a lot of Kickstarter projects, a contribution to The Winding Stream is tax-deductible (minus the cost of the reward you choose).

But maybe just as valuable to us is this – your help in letting others know about the film.  Please help us get the word out to anyone you know who might be interested.  Kickstarter really operates on the strength of word of mouth. So tell your music-loving, history-embracing, popular-culture-craving friends to check us out!

If I do say so myself, there’s a great clip on the site – the opening scene from the film.  Play it and hopefully you’ll get inspired to help us.  In it, Johnny Cash says, “I just had to hear the Carter Family.” I would add, “You just have to see this Carter Family film!”