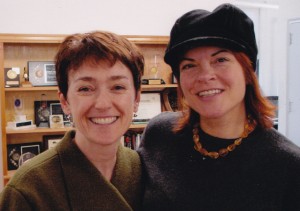 I read recently that as one gets the word out about a project (a book, a new album, er…a film?) a way to engage people is to tell the story of the project as a narrative, a creation myth, if you will.

So, OK.  Here’s the creation story for The Winding Stream.

In 2001, I had just completed my film, Welcome to the Club – The Women of Rockabilly. I’d sent a copy to the film’s gracious and talented narrator, Rosanne Cash, with a note hoping she’d like how it all came out.

Of course, filmmakers –  like all creative folks – want people to like their work.  But in this case in particular, it would mean a lot to me to have Rosanne’s approval of this film, simply because I respect her so much. She’s a great musician, has tremendous integrity and she is very discerning where art is concerned.  So there was that.  But I also wanted her to like it not only because she was a critical part of the production but because she and her father had a special relationship to this music history. (Obviously, her dad Johnny Cash was an early Sun Records star, home of rockbilly music.)

But there was yet another reason I was hoping she’d like it. You see, I had an idea for a new film, a film that would tell the story of Rosanne’s extended family – the Carters and the Cashes.  I saw it as this epic saga of one family’s role in American music, a story that would cover several generations and explain the Carter Family legacy.  It would require the cooperation of many individuals in this family.  Needless to say, I imagined Rosanne would need to like Welcome to the Club a lot before she’d even consider opening up her family to me.

So, that spring this idea was tucked in the back of my brain when I received an email from Rosanne – one that thanked me for the film, saying she was very pleased to have been a part of it.  But then she went on to say something else – that she’d been spending time with her dad and June at June’s homeplace, Maces Springs, Virginia (known as Hiltons, Virginia nowadays), the place where the Carters originated.  The family had gathered to celebrate June’s birthday and Rosanne said that the whole time she was there she kept thinking this would be something she could imagine me filming.  That I should be filming.

Sometimes doors open when you least expect them and I realized that this was one of those doors opening.  So I wrote Rosanne and confessed I’d been thinking of something similar.

And that was the moment The Winding Stream came into being.