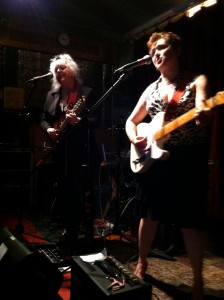 Many of you probably know the Bob Seger song, “Rock & Roll Never Forgets” which is a more than slightly overblown anthem about a one-time rocker girl who clings to her musical roots even as she has reached the advanced age of 31.  My brother Lee once told me that whenever he heard that song (this is many years back) it always reminded him of me.  He meant that in a nice way.  I have steadfastly had music as a centerpiece of my life for a long time, both in the bands I played in back in the ’80s and ’90s and in the work I do making music films.   I have not been able to shake music’s centrality and I don’t ever want to.

But about a year and a half ago I was talking to my brother-in-law Pete about the role of music in people’s lives. He’d pronounced he was going to back off listening to recorded music for a while and only try to connect with the real thing.  I mentioned that this was the state of things back in the early days of the Carters, pre-radio and pre-record labels.  If you didn’t make music yourself, you didn’t get to hear it. I realized that I had taken a rather passive role in my love of music in recent years.  It irked me.

I took this chat to heart and the next day I signed up for guitar lessons (and found a great teacher, my friend Nick O’Donnell).  I’d played a long time ago in my teens but never played in front of an audience.  And then in the years when I was a singer, I was too intimidated to pursue it as part of my musical stage presence.  Some of that was the times (not many chick guitarists as role models in rock & roll) and some of it was just me (chicken).

Well, sweet sixteen’s turned 56 and there isn’t much in my life anymore that seems worth fearing (or better put, I know now what IS worth fear and it ain’t playing guitar).  I was beginning to feel ready to do something that was a real stretch.  Now, no guitar-slingers need to worry about my virtuosity challenging their position. But I have slowly but surely been plugging away at things and last night, for the first time, I played guitar in front of an audience. My dear friend Sylvia Hackathorn (who is a musical gun-slinger, for the record; that’s her on the left) invited me to play three songs with her at a benefit for a women’s music group called Electrogals. It should also be noted that it was the first time in 16 years that I’d sung publicly.

It was a complete thrill.  And I think I handled myself alright.  It felt good up there with Sylvia. Two rocker chicks unleashed.

I have to say that working on The Winding Stream (and talking to my brother-in-law) has brought me back to the idea of people playing music as part of their daily lives.  It’s something I want to make sure I preserve as I move through my life.

Let me know where music fits in yours.