One of the most interesting parts of making The Winding Stream has been the growing realization that there is a groundswell of interest in the type of music it celebrates.  And by that I mean not just the Original Carter Family and Johnny Cash music but also that of any number of roots music progenitors.  And I’ve noted that this interest cuts across generations.  So as I meet people while I make the 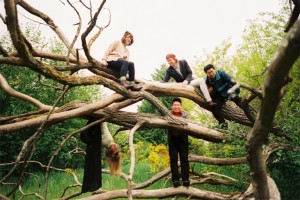 film, it has become less and less surprising for me to meet, say, a 20-something who loves the Stoneman Family.  Or to encounter a group from a big urban environment that includes a Carter tune in their repertoire.  Everyone from Beck to Charlie Haden to Those Darlins has been recording Carter music.  I feel like I’m catching a very big wave lately.

.
All this came up again recently when I met with my new friend David Lasky in his Seattle studio (he of the Carter Family graphic novel soon to be released “Don’t Forget This Song” – see my April 2, 2011 post “See You in the Funny Papers” for more info).  David was showing me some of the pages of this wonderful book that he and Frank Young are putting together.  He also showed me an album cover he’s working on for a recording called “America Salutes the Carter Family.”  Now this isn’t your slick “Bono and Sinatra duet on ‘The Foggy Mountain Top’” sorta deal.  This is by definition a lo-fi project. The person driving this bus is musician Markly Morrison. Markly let me ask a few questions and I think his answers underscore my point about a whole new world of interest in the Carters and old-timey American music.

The project also has a very nice goal of supporting a very worthy cause.  Read on.

Tell me a little about you, where you’re from and your band/music background?

I grew up in the Mojave Desert — Lancaster, CA and surrounding areas to be exact — and moved to Olympia about five years ago.  Some friends of mine moved up here from the Los Angeles area, and soon suggested to me that Olympia would be a more conducive environment to further my musical endeavors.  Since relocating to the Northwest, I have been blessed, doing musical projects about half of my overall year.  I play with a sort of soft rock group called LAKE, and a psych/americana ensemble called Lazer Zeppelin (pictured above).  LAKE has a song called “Sing 99 and 90” which is an interpretation by band member Ashley Eriksson of a very old folk tune called “The Devil’s Nine Questions.” It’s one of those mellow-band-does-hard-rock types of songs that really brings a cool contrast to what we’re doing.  There’s another number called “LMJ” where we kind of take that idea and reverse it — Ashley wrote some personal lyrics to the melody of an old Irish folk song.  Eli Moore based our song “Madagascar” on a traditional Malagasy folk song called “Botsi Boka.”  Lazer Zeppelin also does a lot of folk and country music.  We wrote a version of “Cigareets, Whusky and Wild Wild Women” having never heard the original, and it turns out they are strikingly similar.  We do a version of the spiritual “Moses,” “Jane Jane” which I believe is a Christmas carol, and too many others to list.  And when those bands aren’t active I do a solo project called Skrill Meadow, which in recent years has been straight-up honky tonk for the most part, some originals and a lot of classics from all the good singers.  I also have a handful of other projects and I’m getting really in to wedding entertainment.

Tell me about this project you’re doing now.

About two years ago, Lazer Zeppelin played a concert in somebody’s house with a terrific Olympia rock group called Rainbow Bridge. Coincidentally, both of our bands had re-workings of Carter Family songs, and I just sort of thought that something was going on there. Before giving it much thought at all, I instinctively got my hand-held cassette recorder and decided to start scouring the diverse Olympia musical community for more.  At first I thought of it as a short-term project, you know, just to see what I could gather in a couple of weeks from around the neighborhood.   But it was summer, which is a busy season if you’re a musician, and I couldn’t resist the opportunity to record some of the other groups I would be seeing.  I took the time limit off, dubbed the project “America Salutes the Carter Family,” and have since taken the project on the road for a cumulative year all over the country while touring, visiting friends and family, catching a travelling group coming through Olympia, or going on dental-themed adventures to Tijuana.  In a way I feel a sort of kinship to A.P. Carter, the way he would travel the country as a salesman and collect songs from people in his free time.  I’ve had the opportunity to record nearly 40 different artists in that time – Jeffery Lewis, the Curious Mystery, Peter Stampfel, R. Stevie Moore, Golden Boots, Calvin Johnson… on and on. Sometimes completely on the spot- Seattle-based comic artist/musician Dennis Driscoll is a perfect example. I ran into him in Olympia and asked him if he wanted to sing anything from the Carter catalog, and he just sang into the tape recorder, then and there, on the side of the road. That’s why I always try and have a tape recorder on me. Cassette has always been my medium of choice ever since I was a kid, and I still love the way it sounds.  It really captures the room, the whole situation, and makes the recording feel so real and raw, the way old folk groups would sound when they gathered around a microphone and pressed some 78’s.  A lot of the old tape recorders and boomboxes you find at the thrift store tend to have really nice condenser microphones built in that capture the most intricate sounds, and I think it’s nice to have that continuity throughout the document, despite the stylistically diverse array of songs.  That’s why I haven’t accepted any outside submissions for the project; I want to physically be there, so my notes can tell the story of that particular moment.  And when I found out about Rita Forester’s tragedy, and her connection to the Carters, I thought that this album could potentially raise some financial relief for the Carter Family Fold and those that were affected by the fire back in 2009.

I learned about your project through David Lasky. Tell me about how he’s participating in your project.

I found out about David’s project about a month after mine began, while I was in Chicago with LAKE.   My bandmate Adam saw Lasky’s blog and showed it to me.  I was familiar with David’s work and was pretty excited to hear about “Don’t Forget This Song!”  I looked at the sample pages and within a minute I introduced myself via email and asked if he would be interested in drawing the cover to my pending project.  We’ve met a couple of times since and he agreed to execute the artwork for the record, which we hopefully will see coming out sometime around the end of this year on cassette, vinyl and digital download.  I can’t wait to read the graphic novel, I already think it’s going to be my favorite and I read tons of them.  And to have David’s beautiful drawing on a nice, big LP? Priceless!  I feel lucky to be collaborating with David.

So David, you and I are all doing Carter-related projects – music, comics and film.  And we all live in the Pacific Northwest.  What is it about this place and the Carters?  We’re thousands of miles from Maces Springs, Virginia!

Isn’t that the wildest thing? And all at the same time.  Maybe it’s in the environment, the mountain air and wide country that makes the Carter Family’s music so relevant.   I’ve never been to Maces Springs, but I have grown up familiar with the Carters’ music since before I was conscious of who they were, and living up here has really brought a glow to those old recordings. I have no idea how we all came to be working on similar projects in different mediums.  Is it cosmic?

Here are a couple of links to learn more about Markly’s bands: