When we started work on The Winding Stream, I was given an incredible gift – a chance to interview Johnny Cash. Here’s an account of this meeting I wrote for the Portland alternative paper, Willamette Week (9/17/2003). 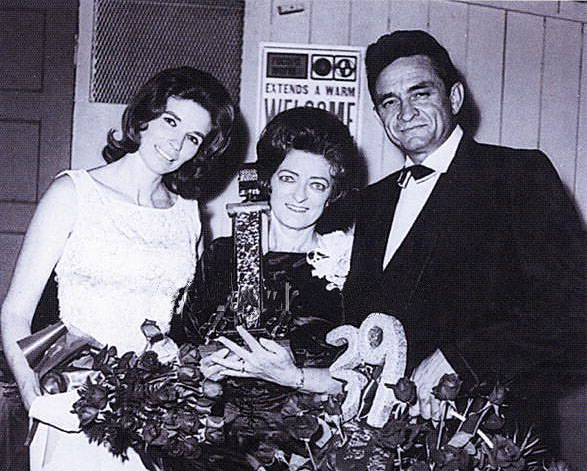 In mid-July, I’d just finished interviewing singer Rosanne Cash for a music documentary-in-progress on the Original Carter Family. As we were packing up, she turned to me: “You know what you should do next? You should interview my father.”

While I struggled to put aside the obvious stirrings of my inner Johnny Cash fan, the fact remained that an interview with him was something I felt was crucial to the film. Not only had he been married to one of the Carter Sisters, June Carter Cash, for 35 years, but he was arguably the major proponent of the Carters’ music in the world.

At the same time, it was not lost on me that this was also a man who’d had more than his share of hardship as of late. In fact, he weathered some potentially spirit-crushing challenges–the death of his beloved life partner June and his own physical decline. I was concerned about the timing of the interview. But with Rosanne’s assurances, I arranged to meet with Johnny Cash a few weeks later.

In the days leading up to the interview, not one person I’d talked to had anything but an immediate, positive reaction at the mention of his name. It seemed that Johnny Cash’s popularity cut across all the assumed dividing lines. It wasn’t that people felt he was a role model, or that the causes he championed were necessarily theirs, nor even, at root, that all his music was universally adored (though I have to think there’s no one out there who doesn’t like some Johnny Cash song). But it struck me that his real power resided in his utterly authentic approach to life and music. People recognized that in him and admired him deeply for it. And, after the singer’s death last week, it will assuredly be missed as much as his contributions to the world of music.

Though somewhat frail, Cash gave a hearty “Hello, everybody” as he entered the room for the interview. When he talked, he demonstrated a vibrancy and humor that belied his physical condition. He still had the gravitas in his voice and the intensity in his eyes. It clearly made him happy to speak of June, and he became thoroughly engaged with the memory of her. Yet, at one point in the reverie, he paused, as if he thought he’d gotten off track. “But that was another life,” he said wistfully.

Later, when he paused again during his recollections, I wasn’t sure where to go. Eventually I said, “That’s the stuff that people wish they had.”

And the Man in Black said, “Mmmm. I know. I wish everybody could have it, because it’s a wonderful thing.”

Then he cracked a huge smile that broke into a laugh.