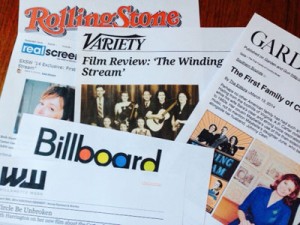 Praise for The Winding Stream

“Rocker-turned-documentarian Beth Harrington (Welcome to the Club: The Women of Rockabilly) celebrates the Carter and Cash family and its enduring contributions to country, folk and roots music in The Winding Stream, an impressively researched and deftly crafted feature that doubtless will find an appreciative audience…”

“A SXSW Best of Fest Music Film – Beth Harrington digs deep into both the family’s legacy and the first-couple-of-country union of June Carter and Johnny Cash.”

“The Winding Stream is crafted like a great country song, full of love, heartbreak, triumph, loss and redemption.”

“Grammy-nominated filmmaker Beth Harrington has done it again. The former rock ‘n’ roll singer-turned-documentarian who put female rockabilly artists in the spotlight with Welcome To The Club now brings us an in-depth exploration of the legendary Carter family…. Not only a fascinating historical excavation of a family’s enormous contribution to American music, The Winding Stream is also visually stunning.”

“For lovers of country and roots music this is a film not to be missed.”

“Beth Harrington’s The Winding Stream was my favorite film from the [SXSW] 24 Beats Per Second program.”

“A loving, musical look at the path carved by the family whose music influenced a young Johnny Cash.”